5. Which of the following is properly sequenced?

6. I am currently working _____ Fair Trade Outsourcing as a Customer Service Representative

8. If she______ talked to you before, we could have arranged a joint project.

9. Which of the following sentences shows an error in subject-verb agreement?

14. When chances were made, he neglected them.

15. The prisoner and his friends escaped.

18. Which is the best sentence?

19. In the sentence "Each of the dogs have a pedigree," the verb agreement is which of the following:

22. He will be wearing a lilac shirt and khaki pants. (Technical Writing)

23.  Brandon the man in the faculty office is the professor of the noisiest class in the university.

24. This letter is meant to be sent with a package, report or other items, the purpose of this letter is to describe what is enclosed and provide a description of what the receiver should do with it.

25. You received a different parcel from shoppee and it cost you an amount of 5789 pesos. What type of letter is appropriate to send to the seller?

1. Read the paragraph and answer the item that follows. "My concept of inner peace came from my mother's daily activities which I now recall with fondness and awe. She was a full-time housewife wholly dependent on my father's monthly salary. How she made both ends meet, guided us in our studies, and did small acts of charity on the side was beyond me. "The mother's financial resources are____________. (2pts)

2. Employees often try to negotiate with their employers’ arrangements that take into account their individual needs—such as asking for more-flexible work hours, a reduced workload, more pay or special training. These arrangements—known as "idiosyncratic deals," or "i-deals"—are sometimes in the interest of both the employee and employer, especially if such deals make employees more motivated and committed to their jobs. But they also can create jealousy, envy, and conflict in the workplace, a recent study found. The research, published in the January 2017 issue of the Journal of Business Ethics, examined how co-workers view i-deals and looked at practical considerations for managers and HR professionals. The study was conducted in Belgium with responses from nearly 2,000 employees. In general, i-deals involving financial compensation were viewed to be the most unfair, followed by flexible hours and reduced workloads, the study found. The researchers said co-workers are more likely to understand when a company grants non-financial benefits because of an employee's personal needs (such as a single parent who has to pick up her children at a certain hour). Justifying financial rewards, however, is more difficult, they noted.

What's your stance about idiosyncratic deals? Are you in favor of this in your own company? (2pts)

4. Not so long ago, the Chinese bike-sharing firm ofo was flush with cash and welcomed as a game-changing tech startup. Today, it's struggling to run successfully. Backed by billions of dollars from high-profile investors like Alibaba, ofo helped pioneer the bike-sharing phenomenon that swept across Chinese cities in recent years. The bikes can be locked and unlocked anywhere via a smartphone app, which means users don't have to return them to designated stations. ofo defeated dozens of copycat rivals, but it now risks becoming the latest casualty of a cut-throat industry. Many angry customers gathered outside its headquarters in Beijing this week to demand refunds. The company and its founder have been put on a government blacklist for failing to pay debts.  Bike-sharing startups in China developed quickly through cash as they rushed to launch services in cities throughout the country and overseas. The chaotic expansion resulted in many bankruptcies and useless bikes. ofo survived, but has struggled to keep up with its rivals since. Bike-sharing was a great standalone service when it launched in 2015, but it now makes more sense for companies like ofo to team up with other transportation platforms, analysts say.

What’s the result of the chaotic expansion of the bike-sharing industry? What’s the convenience brought by ofo? (2pts)

If you are the owner of the ofo company, what are your creative measure solutions to protect your company from going bankrupt? (2pts)

1. "Because of 𝙥𝙧𝙤𝙛𝙖𝙣𝙞𝙩𝙮, the program was suspended from television." The underlined word means________.

2. Several factors must be assessed to arrive at sound______.

4. She offered a tentative solution. What is the word opposite to tentative from the choices given below? 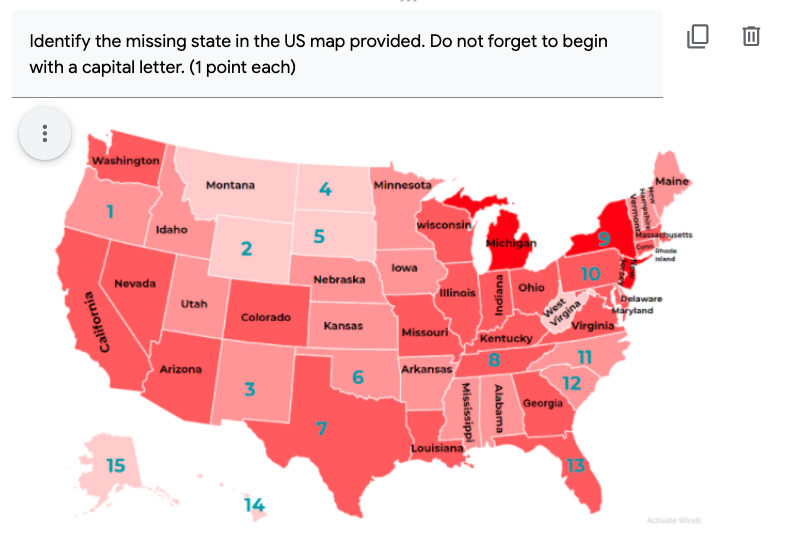 1. What is the capital of New York?

2. What is the Capital of Rhode Island?

3.  What is the Capital of Alabama?

4. What is the Capital of Pennsylvania?

5. What is the Capital of Mississippi?

1. If the current time in the Pacific is 3:00 pm, what time is it in the Eastern time zone? (Without Travel Time)

2. If the current time in the Eastern is 11:00 am, what time is it in the Pacific time zone? (Without Travel Time)

3. If the current time in the Central is 4 pm, what time is it in the Pacific time zone? (Without Travel Time)

4. If the current time in the Pacific is 2 am, what time is it in the Mountain time zone with travel time?

5. If the current time in the Eastern is 9 am, what time is it in the Pacific time zone with travel time?

1. What is the significant role of this training in the enhancement of your career and speaking skills?

What motivates you to finish this training? What is your major accomplishment in or while in the training?